Improving access to customer service was the premise on which Interpretype was developed. In an effort to improve the level of service in his auto repair shop, Ken Gan listened carefully to the requests of his front line employees. In March of 2002, his staff requested a better way to communicate with their Deaf and hard-of-hearing customers. When conversations turned technical, pen and paper proved inadequate. After nine months of research and development, Mr. Gan invented an extremely flexible solution for instantaneous face-to-face communication. He named his device Interpretype, or ITY™ for short, and deployed it at his Mechanical Service counter and in his Collision estimating office. As a result, Interpretype has proven to be so effective in promoting clear communication that his shop has seen a tenfold increase among Deaf customers.

Initial research indicated a demand for his device, so he founded Interpretype Communications, LTD a company dedicated exclusively to solutions that enable face-to-face conversation. Interpretype delivered its first commercial installations during January 2003. Since then, Interpretype has rapidly become a significant communication tool for organizations that want to maximize their human value within the organization, as well as providing extraordinary service through the use of this assistive technology. Some of the first customers to embrace Interpretype were colleges and universities. Schools use ITY™ across the USA. Notable among them is the National Technical Institute for the Deaf, part of the Rochester Institute of Technology, which has over 50 Interpretype solutions on campus. 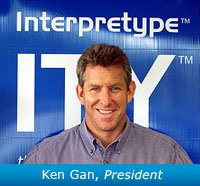 Interpretype offers many applications and benefits that are not readily apparent. In addition to enabling access to careers and services for people who have communications disabilities, it is being used for non-verbal communication in police and military applications. Hostage negotiation teams are using ITY™ devices for internal silent communication. Hospitals are looking to Interpretype to solve communication issues with intubated (ventilated) patients and audiologists can use it to help their patients who have lost their ability to speak.

Since its inception, Interpretype has listened closely to customer feedback and evolved with demand for other features. Shortly after its introduction the Interpretype (ITY) software was upgraded to a Windows GUI (Graphical User Interface) platform. This not only allowed standard PC's to communicate with the ITY devices but also allowed PC's to communicate with one another without using ITY hardware. This migration allowed Interpretype software to integrate other windows based products, such as screen readers and voice to text software, already available in the communication disabilities space.

In 2004, Interpretype added real time language translation. One user can type in English on one computer or ITY device while the other user reads and types in Spanish. Shortly thereafter French translation was added due to demand from Canada.

In May of 2004, Interpretype Communications, LTD received a GSA (General Services Administration) contract. Interpretype is available for purchase by government entities and other organizations that qualify to purchase through the GSA. Many government agencies are looking to Interpretype to help them solve communication challenges, conform to ADA and Section 508 guidelines, and help them reduce expenses dramatically.

2008 was a year of intensive research and development. The goal was to keep Interpretype in conformance with customer requirements for features and capabilities that enable them to serve their customers and colleagues who have communication disabilities. Customers wanted the ability to communicate with several people simultaneously, connect wirelessly, interpret sign language and translate more languages than just French and Spanish.

In January 2009, Interpretype announced its second generation of hardware and software under the banner “Universal Access to Conversation.” The new Interpretype release is a quantum leap that includes several recently emerged technologies that have become practical for business, academic and personal use.

The new generation of Interpretype runs on the latest Netbook platforms. These high powered PC's are network ready with Wi-Fi and internet capabilities, and integrated Webcams among other easy to use features. Interpretype has arrangements with video relay and over the phone translation companies to offer these services instantaneously on any ITY equipped computer.

Interpretype is proud to be the only product available that allows anyone to communicate with customers or colleagues who are Deaf, Hard-of-Hearing, Speech Disabled, Deaf/Blind, converses only in sign language or, speaks English, French or Spanish. And, any of these conversations can take place on demand in any typical working environment with no advance notice. As a result, Interpretype (ITY) is a sole source offering and uniquely capable of delivering "Universal Access to Conversation."